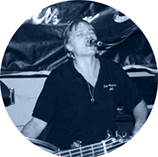 Jodi began playing the drums at the age of 9, but it became apparent earlier in her life that this was going to be a natural talent. "I banged away on coffee cans with wooden spoons, all of which my grandmother had collected for me." Growing up in Waterloo, Iowa, I was a member of the school band from 4th grade on. This included jazz and marching bands. Plus, during my high school years, I played in 2 different country bands. I was also chosen to be listed in the 1982 edition of "Who's Who in Music."

She was the drum major for the Chevalier Drum & Bugle Corps for 2 years during Junior High School. After graduation, she moved to Tulsa, where she met her husband, Rod, through a booking agent. While in Oklahoma, we formed our own band and began the name Silver Wings in which we played all over the state for 14 years. Since moving to Texas in 1997, we have played in a couple of bands mostly in the Clear Lake & Galveston area. It has been 33 years now and we still enjoy playing our music. 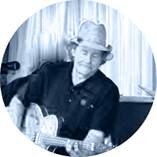 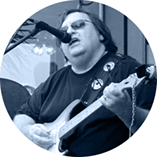 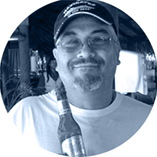 Hector was influenced as a small child by his father who played in a Tejano band.  He grew up around music--following his father from venue to venue.  It was a logical transition for him to begin playing music as a young man.  He joined up with a classmate while in High School and learned to play both classical guitar, and 1970's rock, such as Bob Dillon.  Hector's first band as an adult was a garage "jam band" and he played guitar with some of his friends.  As he began to remember his music roots, it all fell into place.  Hector picked up the bass guitar after a few months and it was natural.

The first music that Hector played with his buddies was alternative rock, then Texas blues.  He learned quickly and took his time at free jam nights, honing his performance skills.  Hector was quickly noticed by other musicians as having talent; invited to play with more people.  He has been the bass player for many bands such as Abraham's Tree, Red's Roadhouse (Undercover) blues band, Little Late for Nashville country band, and Adam Aiken band, also country--he also has filled in where needed.  With his friends, he also founded two 90's alternative bands:  Pull and Gypsy.

Hector has been playing music for over 20 years.  He shows versatility, being able to play many different genres of music, from "Brick House" to "Road House Blues."  Hector was born in Texas' Rio Grande Valley, and grew  up in Santa Fe, Tx.  His homegrown personality makes him approachable.  Come up and say "hey!".

Rod's music started early as his father was playing upright bass for Eddy Arnold on the Grand Ole Opry. He was a songwriter in Nashville when Rod was born. He played piano, guitar, ukulele and taught Rod guitar chords at the age of 11. "I learned to play by listening to and playing with records and the radio. I played in several rock, blues, and country bands through high school as well as taking music theory at WSU."

In 1976 he moved to Tulsa, Oklahoma where he built and ran Echo Recording Studio making demos for local artists of all styles of music. Doing work for Leon McCullough and the Hank Thompson School of Country Music, and live sound work for Reba McIntire. Rod learned to play bass in the studio and by playing for a local agent. He played in numerous bands and with musicians such as with Johnny Gimble in Waco, Texas. He had several songs published by Alvera Records in Tulsa. "My wife Jodi and I played all over the state of Oklahoma for 14 years, and 18 additional years since moving to Texas, so we've got the rhythm!"

Bob grew up in the Galena Park area, and started playing the guitar at an early age.  "I started playing when I was about 10 1/2 years old when my sister got a Sears Acoustic for Christmas.  It didn't take her long to figure out that she liked her nails better than she liked guitar.  Opportunist that I am..........I would sneak in to her closet, fish out the guitar and the "Frito Lay" learning record that came with it........and learn.  I never looked back."

As he recalls, his first song learned was Wilson Pickett's "In the Midnight Hour".  Having two older sisters to "guide the way" with superb tastes in music,  he was constantly introduced to fantastic music of the times.  The British wave, surf music, psychedelia...you name it and he's tried to learn it all.  From Gerry and the Pacemakers to the Beatles, The Dave Clark Five, the Yardbirds, The Beach Boys, The Doors, and the inimitable Jimi Hendrix.  He remembers the day his sister came home with BOTH debut albums:  Jimi Hendrix "Are You Experienced" and The Doors "The Doors".  What a day that was!   After that...he started choosing music of his own.  Steppenwolf,  Iron Butterfly, Spirit, Creedence Clearwater Revival, Uriah Heep,  Todd Rundgren,  The Allman Brothers, Leslie West and Mountain, and so many more.